A valuable instrument used in mental magic specifically for the one ahead method. Instead of forcing a card, ask the spectator to use the watch to 窶彡hoose?EFROM ONE TO FOUR times "at random"

Effect:
Take the watch off your wrist and give it to the spectator. Ask him to pull out the crown and turn it in order to change the time shown. You do this so as to show the spectator that the hands move freely to any desired time, as in any other watch.

Then, ask a spectator to turn the watch dial-face down, pull the crown out and turn the crown as much as he wants. Ask him to look at the displayed time on the watch, and remember it. Ask him to give the watch to another spectator who will follow the same procedure, then to a third and finally to a fourth spectator. While you are giving the instructions you turn round, or perhaps you may be blindfolded. Once all of them have followed your instructions, you face the public again.

Concentrate, and after a moment you reveal the four selected times and who selected each one!

Or maybe this: Show a sealed envelope containing a prediction and give it to a spectator to hold it for a while. Ask for a Bible, and while the spectator is looking up the Apocalypse chapter on it, give your watch to another spectator and ask him to turn the watch dial-face down, ask him to pull the spring out and turn the crown as much as he wants. Once he has done it, the spectator mentions the exact position of the watch hands, for instance: 5: 32 The other spectator looks up Chapter 5, verse 32 on the Apocalypse and he reads it.

When the envelope is opened, your prediction matches that verse exactly, the same phrase is written there!

Timetrix is a valuable instrument to be used in mental magic when you need to use the one ahead method, such as in the case of Mental Epic routines: when using Mental Epic, instead of forcing a card, ask the spectator to use the watch to "choose" any time "at random"... Timetrix can be examined before and after the performance. 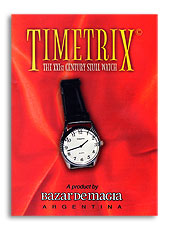