One of the most visual and versatile utility props for the card worker ever invented, here are just two of the many effects possible with switcher.

Effect 1
A "card sandwich" with one card turned sideways, trapped between two other cards is placed on the table. A spectator then chooses a card and signs it on the face. You rip their card up into many tiny pieces and call attention to the trapped card which has been in full view the entire time. You turn the cards over and show that the card sandwiched in between is a Joker, which you pull out and wave over the pieces of their ripped-up, signed card. Watch the surprise on their faces when you turn over the Joker and it's now their signed card! Of course, the ripped up pieces on the table are from a Joker!

Effect 2
Two cards are removed from the deck, placed back to back and secured with a rubber band. You then remove a card which will act as a prediction of events to come. This card is slid in between the other two and left in full view. A spectator freely chooses any card from the deck and shows it to everyone. When your prediction card is turned over..oops, it doesn't match! Not to worry, you slide your prediction out from between the other two, wave it over the spectator's selection and it changes to match perfectly! Both cards may be immediately examined.

Switcher includes all of the necessary, ingenious gaffs, rubber band and detailed instructions. 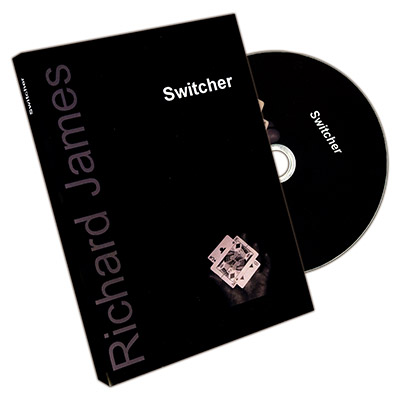