Through special arrangement with our friends at Hocus Pocus, for a limited time, we are able to bring you the Baxt Sucker Silk to Soda Can.

If you perform just ONE sucker effect in your shows, make it this one! Robert Baxt's Sucker Silk to Soda Can is, without a doubt, one of the most comical and incredible sucker effects ever seen. And now, thanks to Robert, he窶冱 making it available to the magic fraternity, and it's absolutely perfect for the stage, parlor, and kid's show magician. And nothing could be funnier!

The performer announces that he will break a sacred rule of magic by offering to explain one of his tricks. Taking out a silk and waving it up and down, he places it into his hand, only to have it INSTANTLY and VISUALLY transform into a soda can! This in itself is very cool magic! But, since the magician promised he would show how the trick is done, he lets the audience see that the soda can he was using is not a REAL soda can at all, but a FAKE soda can. In fact, it's an imitation can that folds up.

And the magician continues, he didn't really make the silk vanish at all. He merely pushed it through the can's opening and made it LOOK like it vanished. Taking the silk out of the can, the magician explains how the trick should be performed, explaining how he concealed the soda can, made the silk disappear, and the soda can instantly appear.

"However, some people might know about these fake soda cans and catch you while you're performing the trick?E the conjuror explains, "So in that case, all you have to do is peel the hole off!" The magician takes the hole off the top of the can and sticks it to his cheek! Then he OPENS the now sealed can!" "SSHHHHHTKKK!" The sound of the soda being cracked open is instantly recognized and heard by the astounded audience! And instead of having a fake can of soda, you now have an an absolutely REAL can of soda! The magician can now pour the soda into a glass, thereby completely stumping the entire crowd! Rounds of applause ensue and no one knows how the magician did it! The magician really did make the silk vanish this time, and the can of soda he holds is real!

Robert Baxt has personally used this time-tested and audience-tested routine in thousands of shows for the past 15 years, and it never fails to get both surprise and applause! You receive the special soda can (more than one year in the making), gimmick, silk, special performance and explanation video hosted by Robert Baxt himself (supply your own glass/mug), and performance rights certificate signed by the inventor! Most importantly, what you are paying for and receiving are the performance rights and routine/secret of an effect that will be a staple part of every show you do! 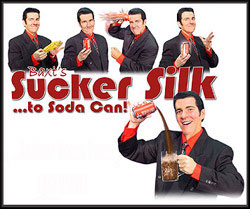