This diabolical effect from the creative mind of John Bannon is one of magic's all time best-sellers. With a clear and incredibly powerful effect and a method ingenious in its simplicity, this will simply blow your audience away. And, what might be best of all, this outstanding effect requires absolutely no or sleight-of-hand to successfully perform. Here's an in-depth description of the Effect:

The performer displays two packets of face-down cards, each packet containing four cards. One packet is red-backed and the other is blue-backed. The packets are tabled, and a spectator is allowed to select either the red or blue packet. Whichever packet he selects is used. There is no magician's force. The spectator is asked to imagine that his packet consists of four face-down queens. Once this is done, he is to think of any one of the four queens - hearts, clubs, spades, or diamonds. Again, this is a totally free choice! A second spectator is now directed to concentrate on the remaining four-card packet, and, like the first spectator, is allowed to think of a different queen. Now, without touching the cards, the performer claims he has caused the two selections to trade places. The first spectator names his card, the performer spreads his packet, and the queen he merely thought of is reversed face up in the packet. This astounding feat is repeated with the second spectator's queen! And there's more! The performer points out that if each of the spectator's queens really traveled across, then the backs of the selected queen would also have traveled across. The face-up queen in the red packet is turned over - it has a blue back! Now the face-up queen in the blue packet is turned over - it has a red back! The effect is truly unbelievable. And there is still more! The performer points out that it is very interesting that the two spectators selected the particular two queens they did. BECAUSE THE REST OF THE CARDS ARE NOT EVEN QUEENS AT ALL - THEY ARE JOKERS! And you turn them all face up to prove it!

Comes complete with a detailed booklet of crystal-clear instructions and illustrations and all the necessary cards (specially printed on Bicycle stock) to perform the effect. Also Available in Jumbo Size ( 5" by 7" ) with blank face cards instead of jokers.
" 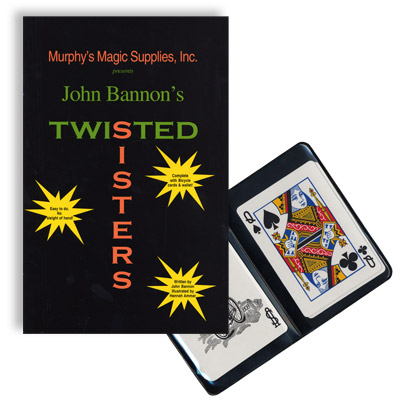