Gregory Wilson - Florida Keys~ A completely baffling impromptu effect wherein two borrowed keys ling and unlink from a key ring. VERY VISUAL!
Kenton Knepper - EZ Torn & Restored Card~ Using only one card, this is perhaps the easiest and most deceptive Torn & Restored Card ever created. Not only that, you can learn this fast!
Docc Hilford - Personal Touch~ Learn how Docc Hilford flies first class when he only has coach tickets! This is a quick crash course in palm reading, spiced with magic!
Guy Hollingworth - Waving the Aces~ Guy's most brilliant creation. The real work is now revealed for the first time, as the aces VISIBLY turn face up while held at the fingertips!
Eric DeCamps - Shadow Coins~ A beautiful, compact coin routine wherein three coins are cleanly vanished and then are caused to magically reappear one at a time. Classic stuff!
Derek Dingle - Silver Quick~ Classic Dingle! Four coins travel magically, one at a time, from the performer's hand to the spectator's hand. Brilliant routining from a master!
Tommy Wonder - The Card in the Box/The Two-Second Card Fold~ Critically hailed as the best "Card to Bo" ever created, Tommy shares all of the intricate details of this powerful routine, including the incredible "Two-Second Card Fold." 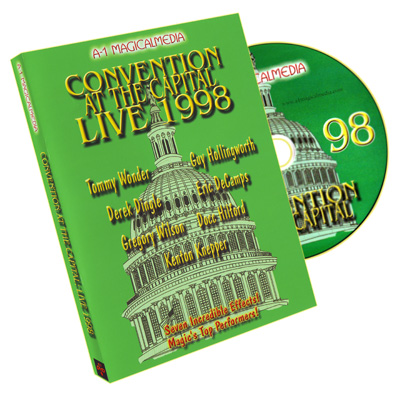