Lennart Green - Xirtam (Performance Only) - Witness the most offbeat Matrix ever seen! Four poker-sized cards are placed beneath four regular half dollars. The cards then assemble to end up beneath one of the half dollars! Matrix backwards!

Jeffy Andrus - Miser's Miracle - Watch and learn Jerry's masterpiece of coin magic! Four silver dollars are produced one at a time from a single playing card!

Whit Haydn - Impromptu Card Code - Imagine performing a card trick for a blind person - making them the star! Actually, any unsuspecting spectator can instantly become your secret accomplice and read your thoughts. Practical and magical!

Paul Wilson - Bottoms Up - A very magical routine that convinces them you've got a killer bottom deal. Easy to do (no bottom deal needed).

Mike Caveney - Impromptu Linking Coathangers - Mike finally releases one of his true pet routines. Imagine linking and unlinking two borrowed and unprepared coathangers! You can have the coathangers examined both before and after the routine!

Joshua Jay - Losing Diamonds - Visibly 'flick' the diamonds off of a card. They flutter to the floor, leaving you holding the selection!

Gregory Wilson - A Fistful of Dollars - A great coin routine from one of magic's most creative performers! Very visual!

Carl Cloutier - Cards to Slimfast - Watch and learn the routine that won Carl the F.I.S.M. World Championship! Four SIGNED cards completely vanish. Three of them reappear inside three different pockets. The fourth selection reappears in your sock! All four cards then vanish again, only to make their reappearance inside a sealed can of Slimfast, opened by the spectator! This effect is worth many times the cost of this video! 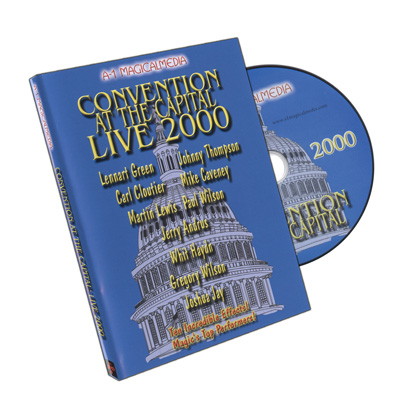