The 1991 FISM gold-medal winning act of Jean-Pierre Vallarino, 'Champagne.' More recently, one may have caught Vallarino on the World's Greatest Magic television show performing his exquisite manipulation act done close up. Watching Vallarino is like watching a ballet of the hands. This may be the most important thing the viewer can take from this video - the beauty and importance of carefully choreographing your actions and hand movements. Vallarino focuses his close-up ballet on cards, coins, and champagne glasses which are produced along the way.

The second sequence focuses on cards and coins: a production of 4 coins, a vanish of the 4 coins, their instant appearance under a card, reverse matrix with one card and 4 coins, production of a glass of champagne, a change of the coins into a deck of cards.

Finally, Vallarino focuses on a deck of cards with a double production of two glasses of champagne to end his act. Included are a couple of deceptive card controls.

This video was originally shot in 1994 by Videonics and has been digitized for re-release. Vallarino's explanations are in French but are very clear and well translated into English. (The DVD offers you the option of listening in either French or English.)

Vallarino teaches an important lesson in elegance and choreography of the hands and props. Here is a chance to learn some lessons that will make your magic better no matter what your style while enjoying the gold medal award-winning close-up act of Jean-Pierre Vallarino. 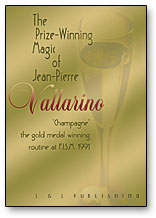