This is unquestionably the most profusely illustrated history of stage magic ever published.

It traces developments and transitions in the art of conjuring from the time of the Pharaohs up to the present, and presents this panorama through a diverting and unusual array of photographs, lithographs, woodcuts, engravings, drawing, handbills, posters and even copies of sketches from the walls of ancient buildings.

These illustrations-taken from Mr. Christopher's private collection of magic memorabilia, the largest of its kind in the world-are very rare and many are unavailable elsewhere. They offer a unique glimpse of costumes, stage settings and apparatus used by performers at various times; the ingenious advertisements they had printed and distributed; portraits of the magicians by leading portraitists of the day; programs and decorative fans distributed as souvenirs during performances; and satirical broadsides that were passed around the streets when certain pompous showmen were ridiculed. Some of the illustrations are paintings by famous artists, such as Hieronymous Bosch, William Hogarth and Peter Breughel.

There probably has never been another profession-as this book makes one realize-whose members have been such consistently amazing personalities, offstage as well as on. Dedi, the Egyptian wizard who was the first to "decapitate" an ox and make it whole again; Johannes Brigg, who did unbelievable tricks with cups and balls, though he had no legs and only one hand; Philladelphia the wonder worker, who once departed from Berlin in spectacular fashon (he left through each of the four city gates at exactly the same second); Robert-Houdin, "the father of modern magic," whose magic quelled a rebellion in Algeria; John Henry Anderson, whom Houdini called "the greatest advertiser in the history of magic" (he sent moulds to dairymen so that parts of butter with his likelness greeted families at breakfast); Patrizio, who caught cannonballs fired from artillery in the main square of Havana; the legendary Harry Houdini, who escaped from every confinement the imagination could devise-these are only a few of the many magicians whose careers are illustrated here.

This book is a pleasure to read and look through; the text teems with lively anecdotes about the wizards themselves and the illustrations are an unfailing delight. Anyone interested in magic, costuming, stage setting and design, ethnology and psychology, or anyone who simply likes to read about interesting people or see unusual prints and engravings, will want to own this book. 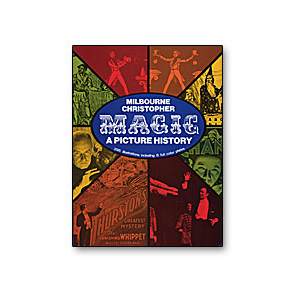