The best just got better! Through special arrangement with Martin Lewis, Hocus Pocus is now able to offer his original signature effect with a vast improvement. Over the past several years, we have received many compliments over the cardiographic's ease of performing and profound audience impact as well as inquiries into how to make the effect even better. And now, cardiographic is repeatable! The newest version of this effect features a specially gimmicked rising card with two faces! A moment after you perform it with one face, simply turn the card around and work it with the second. It's that simple and makes working for trade shows or repeat performances more practical than ever! In case you are unaware of how this effect works:

The magician has a spectator select a card from the deck and then takes a sketch pad and begins to draw what he believes will be the selected card. He reveals his sketch only to be told by the spectator that it is incorrect. He then adds a few lines to the picture and tells the audience that it is really just the deck of cards he was drawing. He tells the spectator to concentrate on their card and, as if by magic, the chosen card rises from the SKETCH of the deck! Truly an unbelievable sight. Then for the best part - the sketch is torn from the pad and given to the spectator to keep! An incredibly strong ending that sends the spectator home with a reminder they will never forget. And now, it's repeatable! 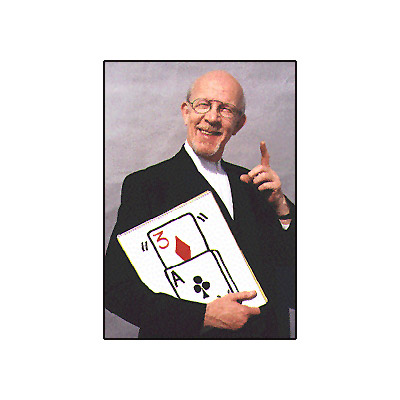