Just imagine the laughter you'll receive from the kids (and their parents!) when you bring a child up on stage and pump his head up to over twice its original size! 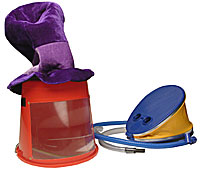