"Now you can do the famed Knight's Tour without any memory work! Do the same effect plus more, as featured by Peter Reveen and Ricky Jay.

Not only that, you can make it entertaining and blow away audiences. Devin Knight has done it again with his new approach to Knight's Tour. You get a whole kit of different versions and methods so you can pick and choose. The best news is that you can master this in 15 minutes after receiving it. Even if you know nothing about chess!

You receive the huge 36" x 36" chess board that can be seen on the largest stages. This is mounted to an upright stand that is included in the price. The chess board has 64 number cards in special pockets that allows for the audience to visibly see and understand what you are doing.

In case you don't know, the object of the Knight's Tour is to move the Knight chess piece so that it goes to each square only once without ever landing on the same square twice. It must be done in 64 moves exactly. A very difficult feat that normally takes months of practice and learning complex formulas.

Not only that, you tell them you will memorize an entire deck of cards prior to doing the tour and call them out while doing the tour at the same time! You allow the audience to choose the starting square and place a large cut-out Knight piece at the starting position. You pick up the deck of cards, give them a quick shuffle and apparently memorize them. They are handed to anyone to check as you call them out. The stopwatch is started. Starting from the chosen square you quickly move the Knight to the next square removing the number card and inserting the Knight.

By doing this the audience can see the board being cleared. YOU DO THIS AT LIGHTNING SPEED -- EVEN FASTER THAN A REAL EXPERT! In the meantime you are calling off the memorized deck perfectly! In less than 3 minutes you complete the tour and your paycheck is safe! 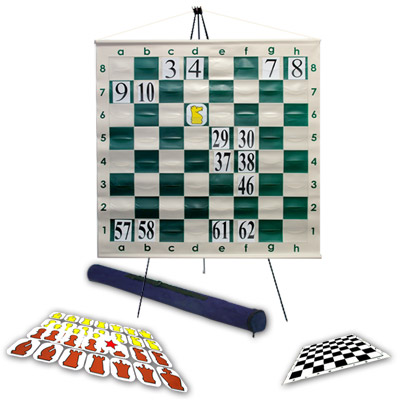