Alain Nu is a full-time creative performing magician who you窶冤l be hearing a lot more of in the future. He has earned his chops by
performing in restaurants, nightclubs, theaters, bars and even on the street. He has created many magical effects that were
specifically designed to "break the ice" and hold the interest of his spectators. On this tape, you will learn audience tested
routines and some Nu-wave approaches to great magical ideas.

?Be My Home Computer: A simple, all-backs routine with a home computer presentation where a selected card visually appears as all the faces come
back.

?That Old Coin Trick: An entertaining and visual coin routine where a coin produced from a spectator窶冱 ear vanishes, appears,
flies to your pocket, splits into two coins and finally and magically, turns into four!

?Eraser Head: A rubber ball held in your left hand, changes places with a coin in your right. The ball, which is made out of putty,
is stretched into a small magic wand shape and used to vanish the coin. The wand (putty) is now used to erase parts of the coin
via David Roth窶冱 "The Eraser". When the coin is erased into nothing, it is found to have been absorbed into the putty!

?Forked Up: An impromptu routine where a borrowed and signed coin is tossed into a cup full of coins. A fork is used to stir the
coins in the cup. When the spectator removes the fork from the cup, the selected signed coin is found laced on its tines. 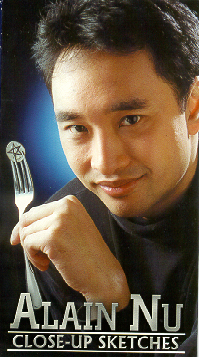