From Ricky Jay, "Ingesters of stones, stoats, and swords have long compelled my attention. Signor Hervio Nano, the fantastic homunculus, defied conventional taxonomy. The well-trained flea has shown sufficient rationality to drive a chariot, impersonate Napoleon, or reenact the siege of Antwerp. Note the enduring popularity of severing from the head its most protuberant organ -- the nose. The Bonassus, advertised as unique, was in 1821 the most numerous hoofed quadruped on the face of the earth. In an era rich in examples of animal scholarship, Munito was a star. "

The multitalented Ricky Jay (sleight-of-hand artist, actor, author, and scholar of the unusual) wrote and published a unique and beautifully designed quarterly called Jay's Journal of Anomalies. Already coveted collector's items, the sixteen issues are now gathered here in a complete set, with significant new material and illustrations. A brilliant excursion into the history of bizarre entertainments, the journal was described in The New York Times as "beautiful and elegant...a combination of rigorous scholarship and personal rumination."

In a delectably deadpan and winning style, Jay conveys his admiration and affection for the offbeat that characterized his best-selling Learned Pigs & Fireproof Women. The journal covers such subjects as dogs stealing acts from other dogs, an anthropological hoax involving the only survivors of a caste of ancient Aztec priests, and the ultimate diet: eating nothing at all. Jay explains how wags since the sixteenth century have cheated at bowling; he explores the ancient relationship between conjuring and dentistry; and he chronicles the exploits of ceiling walkers and human flies. Crammed full of illustrations drawn from the author's massive personal archives, Jay's Journal of Anomalies will baffle, instruct, and, above all, delight.

Read An Excerpt From the Book

About The Author
The esteemed sleight-of-hand performer's one-man show, Ricky Jay & His 52 Assistants, was a critical and popular success, receiving the Lucille Lortel and Obie awards. It set a record as the fastest-selling show in off-Broadway history. Mr. Jay, the former curator of the Mulholland Library of Conjuring and the Allied Arts, has defined the terms of his profession for The Cambridge Guide to American Theater and the Encyclopedia Britannica. He is the author of The Magic Magic Book, Cards As Weapons, and Learned Pigs & Fireproof Women. He has written and hosted his own television specials for CBS, HBO, A&E, and the BBC. As an actor, Mr. Jay is most recognizable from his roles in David Mamet's films House of Games, Things Change, The Spanish Prisoner, State and Main, and Heist. He has also appeared in Tomorrow Never Dies, Boogie Nights, and Magnolia. 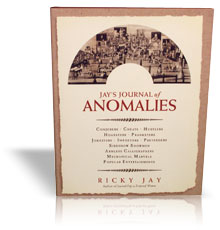