"Never try to beat the devil at his own game" is the theme of this bizarre three card Monte inspired effect. A small photo case of the type used to carry photos in the 1800's is produced by the mage. "How many of you believe in the Devil? What I have here is the only known photograph of old scratch himself. It is a very strange image indeed. I understand it was taken shortly after the civil war when he came around on a head count. You know what I mean. Here, let me show him to you."

The case is opened to show an older gentlemen holding three cards. " I know what you are thinking, this certainly is not the Devil. I admit he looks pretty tame, right? No not so at all. As you can see he is holding three cards. See, his favorite game is the three card Monte or "HELL'S HUSTLE" as he calls it. And man, is he good at it. Let me show you what I mean". The case is plainly closed and handed to the spectator to hold for safe keeping. A deck of cards is produced and shuffled. "I need to warned you now that once you start playing with----- Well, him. Anything can happen and often dose. What you and I are about to do is play a little game of three card Monte with LUCIFER. Come on, don't be chicken. I am playing too. First things first. I need you to select a card for me from my deck. Great! I'll place it here, on the table, face down for now. Now for your card. Actually, your card was dealt long before we started this game. Lucifer dealt it himself and you are now holding that card. Please open the case in your hand."

The case is opened to find that the older gentlemen dose now appear to be possessed by something if not the devil. Also, he is now holding only one card from his original three. It is turned to face us and is the six of diamonds. "This is the card he has held back for himself . But where are the other two cards? Look here! There is also an old and tattered card now stuck opposite of the photo inside of the case. It is the card dealt to you by Lucifer himself. I'll turn mine over first." It is the six of harts. I am starting to see a bad pattern here. Turn your card over,. Quickly!" It is the six of spades and has a note scrawled on it. "I'll be waiting! S. WOW! Looks like were both screwed. Three sixes in a row. The mark of the beast. Man I knew not to pull this old trick out again. Wait! The instructions said if I got into trouble to try to cut to the fourth six. It is a long shot but what the hell, we are playing against the devil. If the last six is cut to, then the pattern is broken and the devil looses his hold on you. You play golf? Well, in magic, this is the same thing as taking a mulligan. Here goes". The deck is shuffled and then cut either by the spectator or the mage. The six of clubs is now flipped from the deck and onto the table braking any hold the devil had over you both. "What a brake! Do you know how lucky we are. No more cards tonight, lets try something else. Hay, have I shown you the one were I pull Rasputin out of a paper bag?

Remember, the magic happens right in your spectators hand. This effect is very easy to do as the case dose all the work. Comes complete with wonderful hand made gaffed case, tattered six of spades, a very entertaining routine and comprehensive instructions explaining the workings as well as a few alternate handlings. 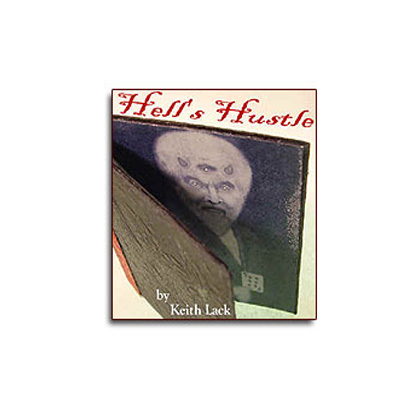