The sequel to J.C. Wagner's runaway bestseller, "Commercial Magic," features more of the magic that made J.C.'s books sell-out and his shows and lectures so popular. Once again you get to see his direct and stunning magic live and on location in his natural environment.

Also taught are the many techniques used within the routines and an in-depth view at the Gambler's Cop. 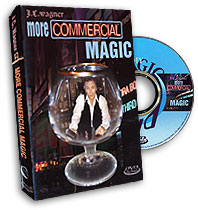