This adaptation of Doug Brewer's best-selling book is a fantastic collection of coin magic for the walk-around performer. 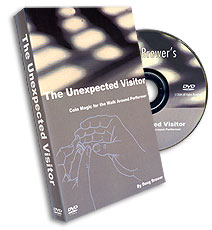