Imagine a spectator freely selecting a card from a normal shuffled deck and signing its face. The performer then shuffles the signed card back into the deck and returns the deck to its box.

Then the performer slides two face-up jokers halfway into the card box on top of the face-down deck (the jokers can even be paper-clipped together). The two out-jogged jokers visibly penetrate down through the encased cards to the bottom of the deck and then visibly rise back up through the cards to the top of the deck. The performer dumps out the deck and spreads the cards. A single face-down card is sandwiched between the two jokers; it's the spectator's signed card!

The magician then slides a small pay envelope halfway into the card box on top of the face-down deck. The envelope takes the same down and back journey through the deck as the two jokers. The performer dumps the deck and the envelope out of the card box, the spectator's signed card is inside the envelope!

The magician then performs "The Ultimate Ambitious Card Finale" by inserting the signed, face-up, "ambitious card" halfway into the card box at the bottom of the encased deck. The card visibly rises up through every card in the deck until it reaches the top. The performer dumps out the deck again and the spectator's signed card is face-up on the top of the deck!! 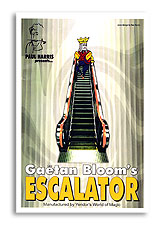