A spectator counts off twenty cards from a shuffled deck which are then separated into two groups of ten and one packet is given to another spectator to hold securely. The remaining ten cards are spread and two of them are merely thought of. The first spectator securely holds this packet. The magician claims that he will cause the two mentally selected cards to vanish from one packet, fly through the air invisibly, and arrive in the second packet! Without ANY moves whatsoever and without even touching the spectators or the cards, the magician completes his mystery. The first spectator counts his packet and is amazed to find that only eight cards remain! The eight cards are shown one at a time, on both sides, proving that the mentally selected cards have vanished! The second spectator counts his cards and there are now twelve! For the first time, the "thought of" cards are named and then cleanly shown and removed from the second packet.

If you're familiar with Daryl's Crossed Thought, keep this in mind: the spectator counts the twenty cards from a shuffled deck, there are both red and black cards in the mixture, and two mentally selected cards invisibly travel across! 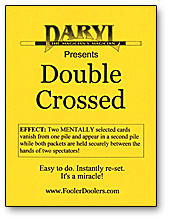