Imagine you have a few people at your home for a party, when suddenly, someone asks you to do a trick. You shrug, pull out a deck, get him to choose a card, then lose it in the pack, whereupon you turn on your TV and click through some channels until you find one you like - lets say it's a scene with a busy sidewalk. You step back, then spring the deck against the TV screen. When all the cards have fluttered to the floor, one card is seen to be sticking (back outward) to the screen! Or is it? For a man walking by IN THE TV SHOW suddenly stops, looking straight into the camera. He furrows his brow, walks up to the screen, then PULLS OFF THE CARD, yanking it instantly into TV land! He looks at it on both sides, showing that it is indeed the spectator窶冱 selection, then he shrugs and walks off screen!

On Screen is an easy, mind-blowing showpiece that will turn your next party into a sci-fi spectacle! Plus, learn 21 more sleights and routines from the minds of David Acer and his friends, shot on tour through Europe and Canada, including:

? On Bended Knee: While seated at a bar, for example, and with a wave of his hand, one coin resting on the magician's knee changes instantly into another!

? The Spice Rack: A restaurant salt shaker is visibly stretched to twice its normal size!

? Four on the Floor: A quick and elegant production of four-of-a-kind from the demented (though not quite addled) minds of David and Richard Sanders! 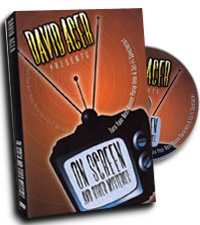