The name Bob Ostin has long been synonymous with creative close-up and card magic, but until now the true depth and breadth of his original effects and methods has remained hidden. No longer! This landmark volume, The Magic of Bob Ostin, will ensure the author his deserved place in history as one of the pre-eminent creators of the 20th Century.

Those who prize commercial, practical magic have long praised Bob窶冱 earlier work, Fingertip Fantasies, as a classic in the field. Yet despite that book窶冱 deserved status, and Bob窶冱 underground reputation as creator par excellence, he has remained something of an unknown to the magic community at large. Well all that is about to change! In an era when so many are striving to 窶亙nvent?Etricks that are fresh, novel and commercial, it is a genuine pleasure to see a master at work. Bob Ostin has been devising cutting-edge magic for over half a century and the material he created fifty years ago is as ingenious, practical and fooling as the new material he developed last week!

Always thinking, and more importantly always thinking outside-of-the-box. Bob is constantly working on new magical 窶湾roblems?Eas he likes to think of them and inevitably he works out a brilliant yet practical solution, resulting in a ?Eorker?Ethat will happily do double-duty and fool the boys at the local magic club as easily as it will stun a lay audience.

One of the definitions of genius is someone who creates (music, literature, art and in this instance Magic!) something that would never have been created had that person never lived. Such a definition surely fits Bob Ostin. Even a cursory glance through this volume will be enough to convince the casual reader of Bob窶冱 creative talents; the more diligent student will be amply rewarded by learning tricks and routines which simply seem impossible! Water that turns to beer, origami men that take on a life of their own, cards that just melt through one another Tricks with cards, coins, dice, rubber bands, chop sticks, liquids, matches, paper, plasters, numbers, photographs, torches, fruit, cars the list is almost endless! Think of any object you like and chances are Bob has a trick (or two!) with it.

Containing virtually all his published output from the past 50 years, this book includes the material from his limited-circulation lecture notes, rare manuscripts, dozens and dozens of magazine contributions, the full instructions for every single one of his marketed effects as well as the many gems that have remained hidden in his notebooks - until now. This book truly is a truly is a lasting and worthy record of The Magic of Bob Ostin A Lifetime of Magical Inventions.

"Knowing Bob's reputation amongst magicians, I am delighted to know that his amazing routines will be compiled and made available to those who love fine magic." - Michael Ammar.

"Bob was the first real magician I ever met. He's a charming guy with an utterly devious mind when it comes to creating magic effects. And best of all, they窶决e all wonderfully practical. This book is long overdue." - David Britland.

"I met Bob many years ago, at Ken Brooke's magic studio, and still have his interesting book Fingertip Fantasies, from which his routine for the coin through the hanky is my favourite. It is straight, direct and nearly impromptu. I like these kinds of routines, and look forward to reading his latest ideas in his new book - Magic Christian. 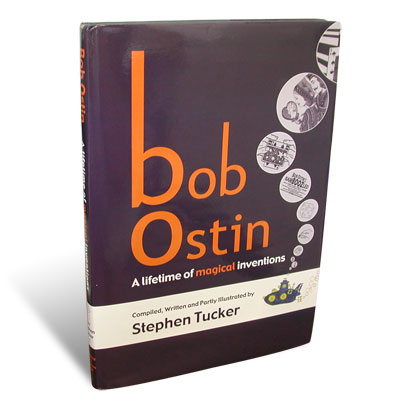