"This is issue nine of The Penumbra, published in October 2005.

In the many months since our last issue, the general public's already steep interest in gambling has crested to new heights, and has even reached the hotel Penumbra. Though we are generally immune to the fads and fashions of the outside world, the poker marathons on the back patio have been getting ever more heated, and Monte Carlo nights have become a regular after-hours occurrence in the dining room.

A recent visitor to the gaming tables here was David Ben, who seemed to fit into the Penumbra style of life with alarming ease. It was almost as if he had visited previously without our knowledge, such was his familiarity with the intricacies of hotel life. His Texas Hold'em demonstration will come in very handy the next time someone asks you about this popular game.

While Mr. Ben's contribution requires a level of skill commensurate with what your audience assumes, Michael Maddox's eponymous stack allows one to follow down a shameful road of falsehood to achieve a similar skillful appearance. One can, however, assuage any guilt by memorizing the necessary table of possibilities, rather than simply relying on the suggested prompt sheet.

A helpful adjunct to any gambling routine is a convincing false shuffle, and BJ Bueno's certainly fills the bill. We fully expect it to be one of the most popular items we've ever published. Consequently, we hereby state that it is to be used for educational purposes only, and be practiced only in the company of individuals known to be magicians.

The ease of most slip cuts is matched, unfortunately, with their lack of deception. Allan Ackerman's approach will take more work than more standard methods, but is most definitely worth the effort. You will discover that it also serves with particular distinction when partnered with Mr. Bueno's shuffle.

As the lone magic effect, we've also included an elegant offering from regular visitor J.K. Hartman, which takes a notion from issue #5 into an entirely new realm. The napkins in the dining room have proven perfect for this, making it a regular feature of some of our recent tableside performances.


The following effects are presented in this issue: 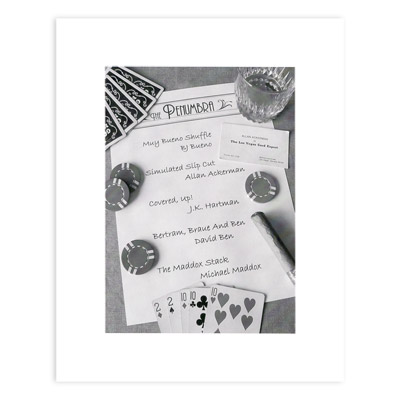