If you know magic, you know Paul Gertner. And you also know his best-selling book-Steel and Silver. These are his most admired routines, the routines that have won Paul every major award in the magic world. On this series of DVD's, Paul performs and shares the methods behind his most guarded secrets and brings the book to life, performing his incredible magic in a hospitality suite situation.

In this volume Paul performs a combination of the most powerful routines from his corporate work and the favorite routines he saves for those late night finger-flinging sessions at magic conventions. 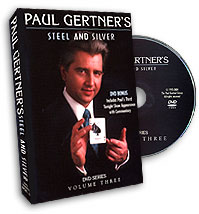