Mental Detector is a wonderful utility item that instantly adds strong comedy and amazing magic to your act. Not only is Mental Detector a full-size AND collapsible real working metal detector in itself, it has an amazing built-in feature that allows any magician to instantly incorporate it into their existing acts. Mental Detector's lights and sound can be instantly activated and manipulated by you at any desired point in your act! And the magic and comedy potential is overwhelming!

Mental Detector has the uncanny ability to find selected cards and coins and is perfect for any type of act whether you work close-up, parlor, stage, mentalism, or children's shows! For example:

Mental Detector comes to you complete with the special, fully-functioning collapsible metal detector with LED lights and hilarious sound, Bicycle deck with gimmick for the included card routine, plus 5 pages of highly detailed instructions which include the three routines highlighted above, ADDITIONAL routines to boot, jokes, gags, bits of business, and ideas.

However, these won't last long at all as we've acquired a limited quantity of Kevin Wade's Mental Detector, and when it's gone, it will be gone forever!
" 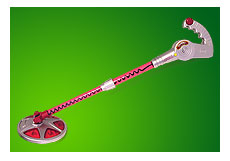