Larry Becker is an internationally acclaimed mentalist, author and inventor. On this DVD you will have the chance to witness a live show during which Larry performs some of his most jaw-dropping mental magic, including a new version of his reputation making Russian Roulette. You will then be taught the routines that have gained him worldwide acclaim. 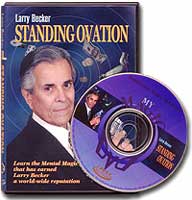