Fielding West is not only a magician's magician, but he possesses that very rare and impeccable sense of comedic timing that has landed him the opening spot for some of the biggest names in show business. A winner in the prestigious Desert Magic Seminar窶冱 Comedy Magic competition, Fielding has opened the show for such A-list celebrities as Liza Minelli, Glen Campbell and dozens more. His numerous network television appearances include spots on A&E窶冱 An Evening at the Improv, Caroline窶冱 Comedy Hour, and NBC窶冱 The World窶冱 Greatest Magic and World窶冱 Wildest Magic specials. Fielding is also in demand as a writer, magic consultant and technical director and has worked with Lance Burton, Siegfried & Roy and many others. Fielding West continues to headline in major resort destinations all over the world and for the first time, he shares the secrets of his tremendous success.

Watch Fielding West in his natural environment, doing his complete 1-hour show for an enthusiastic holiday crowd at Harvey窶冱 Casino in Lake Tahoe, Nevada. Four cameras were there to catch every bit of the hilarity. Then, in a candid interview
that you窶冤l have to see to believe (and that窶冱 all we窶决e saying!), Fielding offers some revelatory perspectives about his career and magic in general. Combine all of that with a 16-minute slide show, narrated by Fielding himself, in which he takes you through all the high points and milestones of his career and you have, perhaps, the most candid and revealing look into the life and work of a successful professional magician ever caught on tape.

Here they are?the innovative and original methods to Fielding West窶冱 magic. These secrets have been held very tightly for decades and many are being revealed here for the first time. You窶冤l be amazed right away by the cleverness of the thinking and then overwhelmed by the thoroughness with which Fielding has worked out every moment of each trick. This is the professional-caliber material that Fielding West has used to make his mark in magic history and for the first time, he explains the 窶徂ow窶冱?Eand the 窶忤hy窶冱?Ewith absolutely nothing held back!

The One Hour Act Includes: 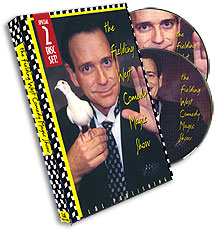