J.C. Wagner is considered one of the best bar magicians. This DVD captures his direct and stunning magic live and on location in his natural environment. Many of these routines have become staples in the repertoires of close-up magicians around the world. They are suitable for formal close-up or impromptu shows. You will also see the entertaining presentations and learn the many tips and ideas garnered from years of performance.

Also explained are the many techniques used within the routines. You will learn the Utility Spread Control, Pop-Up Revelation, Rhythm Count, Knuckle Jog, Snap Change, Two-Step Bottom Palm and much more. 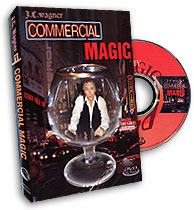