You can't go wrong with Carl Andrews. His experience in working walk around and resort areas are now available to you. The first part of this video is Carl's ingenious and entertaining routines he uses everyday, shown then taught. The second half of the video is worth a $1000.00 or more to the serious magician in this field. Carl pulls up a barstool and gives a lecture on getting work in restaurants, walk around, and other venues. He even goes into teaching you how to make venues where none existed before. 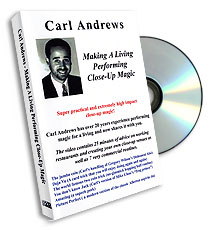