Each one of these incredible DVD's contains several creative stunners that have been part of Richard窶冱 close-up arsenal for over 20 years! You窶冤l learn underground miracles that are practical for real world use. Take your magic to the next level with The Richard Sanders Show!

Shaken: Visual card magic at it窶冱 most visual! Watch dots drawn on a card VISUALLY REGROUP to form the outline of a selected card. All this happens on the back of a signed card that the spectator keeps as a souvenir!

Card in Ear: A two card selection routine where cards change, one card ends up behind the performer窶冱 ear and finally the whole deck vanishes leaving only the 2 selections. A smorgasbord of amazing magic in one routine!

Discovered: An unexplainable card revelation that will fool even the most knowledgeable magicians. The best part is...it窶冱 self working!

Trick Photography: A selected card vanishes from the pack and reappears inside the magician窶冱 hand...inside a picture! This routine has become a standard in many magician窶冱 professional performing repertoires!

The Audio Vanish: Vanish any small item from your card case! A ring is dropped into the card case. In short sleeves, the magician shakes the card case and the ring is heard rattling inside. When the spectator says go...the rattling immediately stops and the ring is gone from the
case. Everything is self contained and there really is nothing in the
case at the end!

Stickmen 4: A wild packet trick that uses only 4 cards!
One at time little stickmen start appearing on the backs of four jokers.
Here窶冱 the killer finish, like a special effect, all the stickmen visually jump onto the
back of the chosen joker held by the spectator. You actually see the stickmen jump
...think George Lucas meets Ed Marlo!

Sugarless Bill: A borrowed bill vanishes and then reappears inside an unopened,
sealed package of gum! This trick alone has landed Richard thousands of dollars worth
of contracts! As a bonus you will see Richard performing this trick on Canadian television.

Castle Purse: The closing effect to Richard窶冱 Magic Castle performance.
A folded card is shown inside a small coin purse and then set aside. A card is chosen
and signed by a spectator. A small selection of tricks are performed. To end the
performance a small set of tweezers are used to gently and very slowly remove
the folded card from the coin purse. THE FOLDED CARD IN THE PURSE IS
THE SIGNED SELECTION! As a bonus, you will see Richard perform this
miracle live at the Magic Castle in Hollywood. 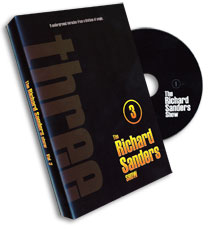