"William V. Rauscher (S.S. Adams) presents an array of past and present unusual personalities in the field of psychic entertainment and private readings. Like a vaudeville show, the performers appear in a series of acts that confuse, confound and perplex their followers, and create ethical issues for laymen, researchers, and magicians.

This assemblage is a potpourri of remarkable characters whose talents, skills, performance styles, personalities and approaches vary greatly. For want of a better term, they are The Mind Readers, and they are Masters of Deception.

The players presented want their audiences to believe they possess strange powers. Their language capabilities, knowledge of psychology, and sheer nerve combine to accomplish their purpose, and offer a lesson in the dynamics of mind control.

You will enjoy this book as a performance-a tour-through a labyrinth of colorful, perplexing and enigmatic people who are committed to making you believe. 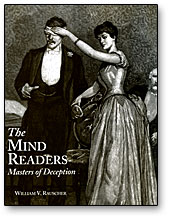