The magician takes a pack of playing cards out of an elegant box. After handing them to a spectator to shuffle, they are placed face down in the box for security. Another spectator is given the box to hold. He takes out a card and holds it (face toward him) to his forehead. Immediately, the magician divines the color and value of the card! This is then repeated with the next card. In fact, it can be repeated over and over again! What窶冱 more, the magician is blindfolded, with his back toward the audience!

The cards are shuffled by the spectator and placed into the box. The lid is placed on again to make sure there is no trickery. You take out a small tube that you can look through. Holding it against the top of the box you can see and name the top card! The spectator takes the card out to prove it窶冱 correct! After this has been repeated several times, the spectator is asked to take a look through the tube. When he does, he sees nothing. The box is then opened only to show there窶冱 a blank card on top. No wonder he saw nothing! Neither the magician would have seen anything, either!

A spectator shuffles the cards and they are put into the box. One by one, the magician takes cards out of the box until the spectator says to stop. The card stopped at is the card you wanted to force!

A card is chosen and then mixed into the deck. The shuffled deck is placed into the box. One by one, the cards are dealt from the box onto the table. Another spectator says to stop and the card stopped at is the chosen card! 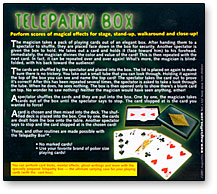