Jerry Andrus is one of the most original thinkers in magic and beyond. His magic and optical illusions have been featured on television shows and in magazine articles all over the world. These programs offer you an opportunity of a lifetime where you can see him perform and explain many of his greatest inventions. You will see and learn astounding magic with cards, coins, balls, handkerchiefs and much more.

Mylar Mystery: A yellow spot on a piece of mylar turns into a three-dimensional ball which is bounced, examined and then put back into the sheet to become a flat spot. The effect is repeated several times with each occurrence becoming more impossible.

Zone Zero: A ball vanishes every time it enters a hole in the center of a stiff board and reappears when you reach inside the opening to get it.

Perfect Package: A flat cardboard box is removed from an envelope, unfolded and a ball rolls out. The ball is put back, the box is once again folded and placed back in the envelope.

Impossible Shuffle: A signed card is returned to the deck and the deck is shuffled into the card case. When the spectator cuts the case their card appears under it. The case is now opened to show that the entire deck has vanished.

A Word In Mind: A thought-of word is written on a playing card and the card is lost in the deck. You can now name the word with one-hundred percent accuracy.

Spectator ESP: A spectator touches a card in a fan while a second spectator names that card while her back is turned.

I.O.U: Under the pretense of a bet that you can make the deck float off the table you shuffle the cards in a unique way so at the end they spell the letters I.O.U.

Satan's Selections & Shuffles: A multi-phase card routine where two signed selections are lost in the deck using some wild looking shuffles and cuts. The deck is then shuffled by three spectators and when the cards are finally cut in half they are seen to be separated with all the red cards together and the blacks together. As a kicker the red selection is among the black cards and the black is with all the reds.

Wichita Wonder: A signed card is returned to the center of the deck. When the deck is dropped into the spectator's hand the entire deck vanishes as the selection flutters into their hand
.
Twin Pipes: A cups and balls type of routine using two brass tubes, three rubber balls and a coin. The routine is full of new and creative techniques which feature many impossible looking appearances, vanishes and transformations. 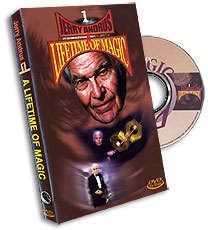