"Try the Impossible by Simon Aronson In Simon Aronson`s latest book, he invites you to Try The Impossible.A spectator freely names any card. A second spectator freely touches any card - and it matches the named card! The performer never even looks through the deck! Control two freely selected and replaced cards to virtually any two positions you desire - without any sleight-of-hand!Imagine dealing five strong poker hands, each better than the previous one, with the dealer receiving a Royal Flush in spades - and being able to instantly repeat it again and again with no resetting!Two freely selected cards magically appear at two freely named numbers!The deck itself correctly reads a spectator`s mind, four times, to reveal her selected card - and discovers the matching four-of-a-kind as well!One spectator freely chooses and pockets two cards, whose identities remain unknown. From a second, shuffled deck another spectator freely touches two cards - and both cards match the first chosen pair!Aces assemble one-at-a-time, and then all appear under the spectator`s hand-with no extra cards and no palming!Predict the exact location of two freely cut and replaced cards! Try The Impossible also contains an all-new, in-depth look at the Aronson Stack, with over 25 new effects that don`t require memorization of the stack and leave the entire deck intact!And there`s so much more..mind-boggling locations, spelling effects, a gambling scam, the Head Over Heels move, the UnDo Influence control and even a rap Ace production! Extensive comments offer variations, theories, presentations, lead-in and follow-up routines and in-depth insights that will keep you thinking. Try The Impossible presents a wealth of new, baffling and entertaining card magic that doesn`t depend on difficult sleight-of-hand. Hardbound, Over 275 Large (8 1/2" x 11") Pages and Beautifully Illustrated With Over 120 Photos" 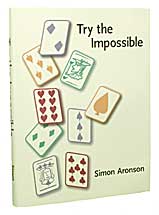