Elizabeth IV ?EThe performer removes a clear envelope with a wager and a prediction. Any card is named and contents of the clear envelope are openly removed. The prediction matches the freely named card.

Rubik's Card ?ETommy shows a small box filled with blocks that have card pips on some of their sides. A card is selected and the lid is removed from the box to show that the blocks have somehow arranged themselves to form an image of the selected card.

Socked Coins ?EThis routine has never been explained and has been a closely guarded secret that Tommy Wonder has kept for himself. It窶冱 one of the finest coin routines ever created. In a lesson on how to lose money, coins penetrate a spectator窶冱 hand in an increasingly impossible manner. It resets, can be done without a table, and is incredibly strong.

Tommy goes on to explain his workings on Cough DROP, vanishing bird cage, the boomerang card, the Zombie Ball, and his wonderful ring and rope routine. 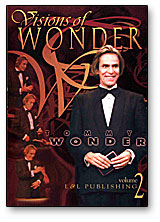