In the summer of 2002, three masters of Coin-Fu met at a secluded monastery (strangely resembling the site of the IBM convention) for the sole purpose of bashing their audiences senseless. Their weapon of choice? Coins.. . at close range.

In the wee hours of the morning, video cameras captured the most dramatic moments of what westerners call a ?Eession?Eand escaped alive with the only known footage of these bizarre and mysterious rituals.

East met West as two masters of the unusual stepped upto the mats. Kainoa Harbottle met Kam's attack with a production sequence not for the queasy - 窶漏epeat Coins from Nostril.' Stunningly grotesque, it uses parts of your face not normally involved in western presentations. He then staggered the others by tipping his groundbreaking work on the underground Mutobe Palm and an ingenious ?Epider?Eapplication of the otherwise ludicrous 窶椀ver the top?Evanish from Bobo's Modern Coin Magic.

Finally, from the exotic, mysterious land known only as 窶榔ortland?E came western master Reed McClintock, who delivered the deathblow by actually performing 'International Dissolve' from his aptly named manuscript series, 'Knucklebusters. To rub salt in the wounds of the disbelieving, he then explained how it was done, and made it seem easy. The ending to this routine will pummel you, so be prepared to defend yourself 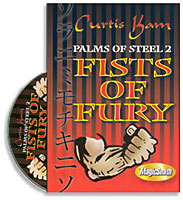