"I was completely fooled."
-Derren Brown

"It's a killer. You know those tricks you have in the back of a drawer? This is the opposite."
-David Regal

The performer explains that he's trying something new in his life-he's given up making decisions for himself and instead rolls the dice and let's chance decide his fate. A spectator is handed a red die and asked to give it a roll to decide how the rest of the time they spend with the magician will go. Let's say the spectator rolls a five. The performer then displays his "options cards," six laminated and numbered cards with different actions on their backs. The performer lays all six cards down on the table in a row and requests that the spectator turn over the card which matches their rolled number. The spectator turns over the card numbered five and it says "Be Nice" on the back. "It'll be tough, but I'll try." says the performer. Of course, everyone is wondering what's written on the backs of the other cards...when they're turned over each and every other card says "KILL!" across the back! "I'm so relieved, I couldn't go through last night again!" 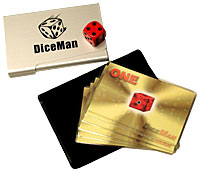