This new edition combines two of Jim Steinmeyer's most sought-after titles: Discovering Invisibility and The Science Behind The Ghost. Originally published in 1999 in an edition of only 150 copies, The Science Behind The Ghost is a history of Pepper's Ghost. It explains the variations, angles and discoveries which were responsible for this famous illusion. The book contains a complete explanation of the secrets involved and how they were evolved by different inventors through the years, ending with a discussion of how Pepper's Ghost was used in Disney's famous attractions. Discovering Invisibility was published earlier this year in an edition of 150 copies and quickly became unavailable. It is a complete discussion of how mirrors came to be used in stage illusions and the important and little-known secrets behind these effects. The two books have now been published in this one volume. A fascinating history of mirror illusions, from the famous ghosts that walked the stage in London to the secrets used by magicians throughout the 20th Century. Included are full illustrations of the effects and principles, historical drawings, diagrams and bibliographies. 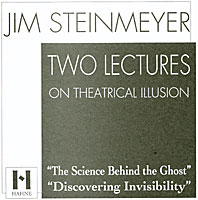