Phil Cass is one of the leading performers in Australia. A recipient of the "Australian Variety Artist's 'Mo' Award" as "The Best Speciality Act In Australia" for seven consecutive years he has also won awards for his close-up and comedy magic shows.

Commonly referred to as the Shell Game it is a magical routine based on the classic con game using three walnut shells and one small pea. The mark tries to guess which shell the pea is under, and they always lose. Phil has made this the mainstay of his close-up work for many years and those willing to study his presentation, technique and timing will have a complete 20-minute act added to their repertoire. Just wait until you see the killer climax.

In addition to the techniques of the routine Phil discusses at length the psychology of how to make the routine interesting, challenging, confrontational and of course entertaining.

"The most commercial and magical Pea & Shell Game I've ever seen窶ｦ and I've seen 'em all!"
窶ｦRoger Klause

"No question, it is one of the best 'presentations' I have seen on the scam and how he NAILS the spectator is a lesson in psychology one could learn much from."
窶ｦPete Biro

"Phil's wonderfully edgy showmanship is very fun to watch. Because of the psychological push and shove between the performer and his mark, it plays for a bigger room than most routines can. It is by far one of the most different and original presentations I have seen."
窶ｦWhit Haydn, School for Scoundrels 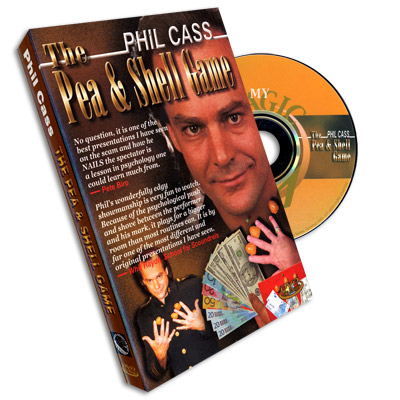