For almost two decades David Solomon was privileged to be part of the "Inner Circle" of card magic which surrounded the legendary figure of Edward Marlo, which included such respected names as Simon Aronson, Steve Draun and Bill Malone. Though Marlo was a notoriously private man, David became one of his closest confidants. Studying with Marlo, David developed an understanding of his methods, techniques and overall approach to card magic and that understanding is apparent in the 13 complete card effects contained on this DVD. 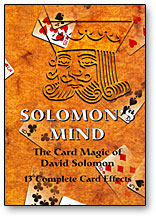