Dan Harlan was instrumental in popularizing magic with rubber bands and is widely considered a master of rubber band magic. On this DVD he teaches the original routines and techniques that gave him his worldwide reputation. You will learn easy-to-perform rubber band magic that's perfect for impromptu situations.

All the routines are impromptu and can be done with borrowed rubber bands. In addition to the above routines Dan also teaches variations, applications and ideas to further enhance the magic. Original release date: DVD: July 2004, VHS: 1993. Running time: Approximately 60 minutes. 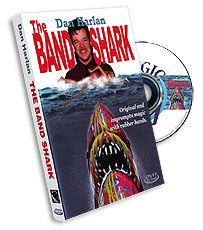