In February 1989, Werry woke up in the middle of the night, sweating from a nightmare. What happened in this dream, which seemed like a ghost story, he turned into a miracle some months later. The effect created was good enough for TV: Poltergeist!

The magician turns the theme of the evening窶冱 show to the discussion of spirits and the supernatural. Having done this, he introduces a pack of playing cards for someone in the audience to shuffle. A card is chosen by a spectator and returned to the deck. Another shuffle, and the deck is placed into an elegant box and then covered with a lid. Holding the box at his fingertips, the magician explains that he no longer has control over the situation. Suddenly, the lid flies off and cards start to spring out of the box all over the table! the Poltergeist had confirmed his presence! ?Eand even more surprising, the top card of the remaining few in the box is the selected card of the spectator lying face up!

Werry窶冱 Poltergeist is really a supernatural experience for your audience!

? There are no thread or wire connections
to your body, table or other objects!
? Nothing is concealed in your hands!
? No forcing of the playing card!
? Self-contained automatic gimmick that
leaves you clean at end of performance!
? Special gimmick for Bicycle playing cards!

Specially designed to be used in conjunction with the Telepathy Box 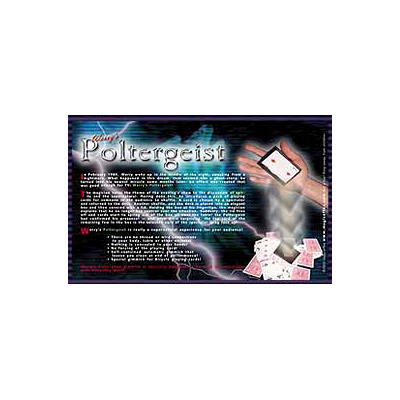