This is clearly one of the best videos Aldo has ever produced! There is something for everyone in standing room Only! With magic for the stand-up and walk-around performer, this 90-minute video features effects that don't require a table-everything can be performed in the magician's or the spectator's hands. Fifteen routines with cards, coins, rubber bands, sponge balls, rope, finger rings, bills, jumbo cards...even a carpenter's ruler! 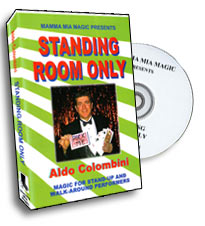