This enhanced film of Edward Marlo was shot on January 22, 1971 in Chicago, Illinois. Only two other films were made during Marlo's prime when
he was in his fifties and at the height of his powers. This video shows over MARLO
forty-five sleights, techniques and tricks.

This is not a teaching tape. But if you love card magic and Revolutionary
Card Technique, you will treasure this historic, fascinating film. Narrated by
John Racherbaumer and produced and edited by Video Specialties. 1 hour. 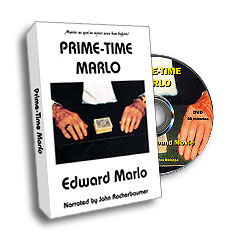