Deck That Shuffles Itself by Dominique Duvivier - Trick

"Deck That Shuffles Itself
by Dominique Duvivier

The performer takes a deck out of its case. He spreads it face-up on the table. The deck is now squared and put aside.

The performer pretends to shuffle the deck invisibly: he pretends to take the deck (in fact the deck stays on the table and he acts as if he had the deck in his hands), put it on the table in front of him, cut it in half, turn one pile face-up and shuffle both parts with a riffle shuffle, square the deck, take it and put it back where the real deck was.

The deck is spread on the table, and all the cards are mixed, half face-up and half face-down, as if these fictitious actions became real.

The deck is put aside. The performer separates the cards in the same way with an invisible deck in his hands and then puts it back. The real cards are spread, and all the cards are face-up again. He squares the deck and puts it face down. He then spread the cards, showing that only the card backs are visible.

The performer puts the deck back in it case and closes it. As he puts it away, he changes his mind and hits the short side of the case, showing that the image on the front of the case has become compressed.

Comes complete with gaffed card deck and detailed instructions on how to perform this trick.
" 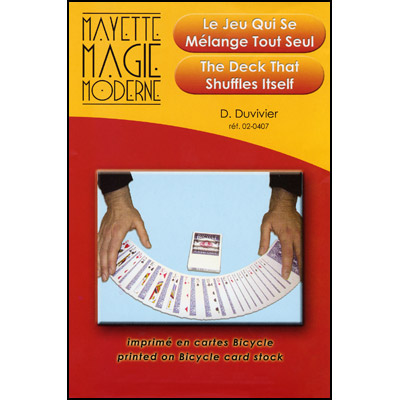