Yves Doumergue has stunned many knowledgeable magicians with his Ripped & Restored Card. If you ever wanted to do a torn and restored card routine with a one piece at a time restoration this video will teach you Yves' creative new methods which have been embraced by many professional magicians. Yves performs and teaches three outstanding routines, all clever, relatively easy to perform and with visual restorations that look completely impossible. 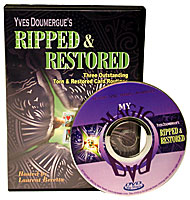