Underground Magician Rodney Reyes--the Bruce Lee of close up magic--takes you on a step-by-step journey through the world of underground magic.

For the first time on DVD, you窶冤l experience the pure style of underground magic as you master cutting edge effects. Reyes teaches his signature effects with a strong mix of theory in this stylish, action-packed DVD. Prepare to take an inspired look at your magic as art.

Effects
? I.C.U.- A knockout face up ambitious routine.
? Glock 52- 2 chosen cards shoot out of a deck shaped like a gun, a very deadly comical effect.
? Slap City-The four of clubs is split into the two窶冱, then split into the aces with and outstanding kick ending that will floor your audience.
? Trifecta- This one窶冱 too hot to tip. It窶冱 been circling underground and is now surfacing for the first time.
? Short Stack- From the brainchild of Syd Segal comes a card effect that goes 窶廡urther Than That.?E
? Ace Flourish- An eye-popping revelation of the 4 aces.
? Coining Copperfield- A first in coin magic. A coin passes through a spectator窶冱 fingers.

Bonus Effects
? Shed A Tear: Rodney窶冱 Torn and Restored card for the first time on DVD. A chosen card is torn into 4 pieces. In a wave of the hands the card is fully restored. Impromptu version included. 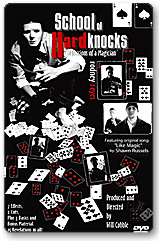