Effect: The performer explains that for his strange little miracles to occur, he often enlists the help of "friends" to make magic and mischief He shows both hands empty, cups them, and calls forth for a spirit to occur. Not only does the spirit come, but it takes the form of a little demon, and is found nestled in the performer's cupped hands. The hands are once again opened.... the demon has vanished! Again the hands are cupped an incantation made, but ...no demon! The spectator is asked to take a peek inside the performer's hands. Suddenly without warning, a firey glow appears in the performer's cupped hands and the demon appears, eyes blazing with an evil glow, as if he has just surfaced from the bowels of hell itself! Feeling the need to gain control of this evil, the performer chants a vanishing spell, and opens his hands. The glow and the demon are both gone...Back to hell where they belong! 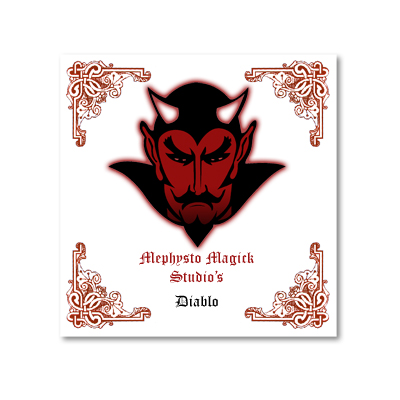