Good opening effects are hard to find-even more so when they're self-working and leave an examinable deck. The devious method behind Gordon's Joker Joker will bring a smile to your lips, and its direct, inexplicable effect will produce gasps from your audience.

You start by saying you must first remove the Jokers from the deck. After taking out the first one, you decide to let a spectator find the other, with the cards face down.

Despite having multiple chances to stop or move on, and without a single false move on your part, the spectator stops on a card. It's turned over, and it's the second Joker! No other Jokers are in the deck and the pack may be examined!

Also Includes...The Los Angeles Open-perhaps the most baffling version of the Open Prediction ever released. After a card has been announced as a prediction, and with the deck in her own hands, a spectator deals cards face up until she wishes to stop. At this point, she deals a card face down, then deals the rest of the cards face up. The openly predicted card doesn't show up, and the spectator herself spreads the deck to see the only card she left face down was the performer's prediction! 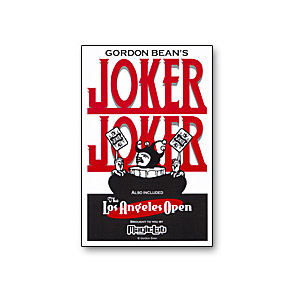