The magician tosses a deck of cards to any volunteer in the audience and relates that earlier in the day he had a premonition. He asks the volunteer to simply name any card in the deck-he has a completely free choice. The magician continues to explain that after his premonition he removed one card from the pack and placed it in his pocket.

The spectator himself then removes the cards from the case and counts them out, looking at each card's face. He gets all the way through the deck and finds there are only 51 cards, none of which were his named selection! The performer reaches into his pocket and removes one card...the spectator's selection!

Comes complete with the very special deck of cards and fully-illustrated instructions. 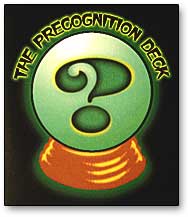