"Aladdin`s HankerchiefExperience Ghostly Magic The performer displays a short length of rope and a small, seemingly empty vase to the audience which he says contains an invisible magic genie. Offering to prove this questionable claim, the performer stands the vase on the table and inserts one end of the rope partly inside. The genie seems to grab on because when the performer lifts up on the rope, the vase rises, too-magically suspended in the air!The magician then shows both sides of a black hankerchief and lays it out flat on the table. He dumps the invisible genie out of his bottle apparently catches him under the hankerchief. Magically, the genie begins dancing under the hankerchief, rising it up and moving the cloth back and forth! But, when the performer lifts up the hankerchief the genie is gone without a trace!Comes complete with small vase, secret gimmick, short length of rope, specially gimmicked hankerchief and detailed instructions with 16 different ideas and tips. (Includes top secret code with a bonus routine revealed in Ring-Scape.)" 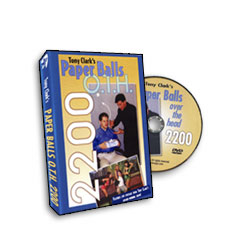