After the initial success of Roger Klause's In Concert program he agreed to release more of his favorite routines and techniques. Once again his attention to detail will walk you through some well thought-out and constructed routines that you can incorporate into your performances. This is your chance to have an intimate teach-in with one of the most secretive men in magic who is tipping his guarded methods. 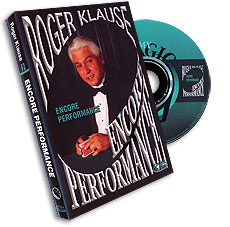